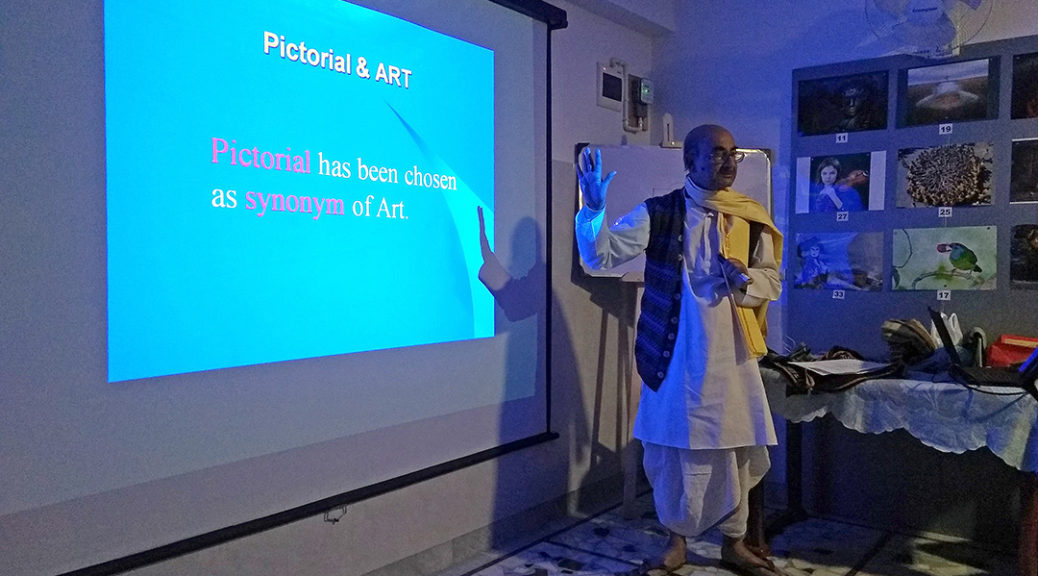 Prof. Biswatosh Sengupta of Photographic Association of Dum Dum, the legendary figure in the field of propagating and preaching the art and science of photography, presented a beautiful seminar on ‘Pictorial Photography – a Visual Art’ at Barrackpore Photolovers’ Association on 26.01.2018. It had been a Red Letter Day for the members, students and all the  photolovers of Barrackpore who had been looking for this day with so much of interest and enthusiasm.

In his articulation, Prof. Sengupta started with the cave paintings in the earlier days of human civilization that produces first example of visual art. It is a process of expressing creativity that may be manifested in the field of painting, sculpture, songs, music, cinema, photography and so on. He states that unlike other fields, photography is much younger in age. And yet it has become one of the most powerful and popular medium of expressing thoughts and imagination.

However, photography had to strive a long battle in establishing itself as a  separate branch of visual art. Prof. Sengupta cites several examples in the developmental stages of photography, like, the first heliographic image created by Joseph N. Niepce in 1816, or the View from the Window at Le Gras, the first surviving photograph of the real world scene using Camera Obscura with as long as 8 hours of exposure. The example of Two Ways of Life, a moralistic photo montage which was created from 32 negatives by Oscar Gustaf Rejlander in 1857, has been a creation of art photography of all ages. Prof. Sengupta also presented   several other examples of art and culture and explained them from the point of view of pictorialism.

Barrackpore Photolovers’ Association expresses its regards and gratitude for the eloquent and live presentation of the maestro, Prof. Biswatosh Sengupta.